The Tides Are Turning on The Popularity of Open-space Offices 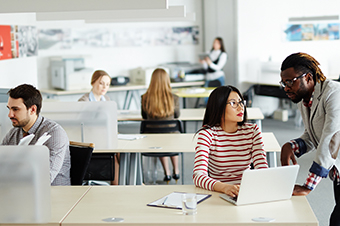 Since the turn of the millennium businesses have been driven largely by increasing rent and technology to enable employees to be ever-more mobile and less tethered to the office.

It appears as though more and more businesses are starting to put the walls back up where there were not so long ago taken down. And the evidence is in to support the notion that perhaps our zeal for ‘cool’ spaces was perhaps a little to shallow in first considering the needs of employees. Consider the following:

A study of 10,000 workers funded by office furniture giant Steelcase revealed that "95 percent said working privately was important to them, but only 41 percent said they could do so, and 31 percent had to leave the office to get work completed."

Office workers lose an average of 86 minutes per day due to distractions associated with open-plan offices. As a result, many employees are "unmotivated, unproductive, and overly stressed," according to the study funded by Steelcase.

People aren't stupid. They know that behind the hip-sounding biz-blab about "collaborative work areas" lies the perennial desire of the paranoid, insecure micro-manager to peer over every worker's shoulder at a moment's notice.  This is particularly true in a shared office environment with multiple businesses sharing space, where that nosy person next door looking to kill time pops the ear buds out to listen in on your conversation over the partition.

A study at Queensland University of Technology's Institute of Health and Biomedical Innovation found that working in environments without offices causes “high levels of stress, conflict, high blood pressure, and a high staff turnover."  Not surprisingly then, employees in open-plan offices take more sick days.  According to The New Yorker, companies with open-plan offices can expect employees to take a whopping 62 percent more sick leave.

« BACK TO NEWS FEED

5 Easy Ways to Simplify The Way You Work

Stop over complicating your life trying to keep up with the pace of change, when you should be looking for ways to simplify your days.

The Importance of Face-to-face Meetings

In today’s business world of video meetings and teleconferences, we still believe that face-to-face interaction is and always will be our most effective form of communication.

From booking a meeting room to booking your expenses, our team can help.

We'll take care of the administrative details, so you can focus on growing your business.